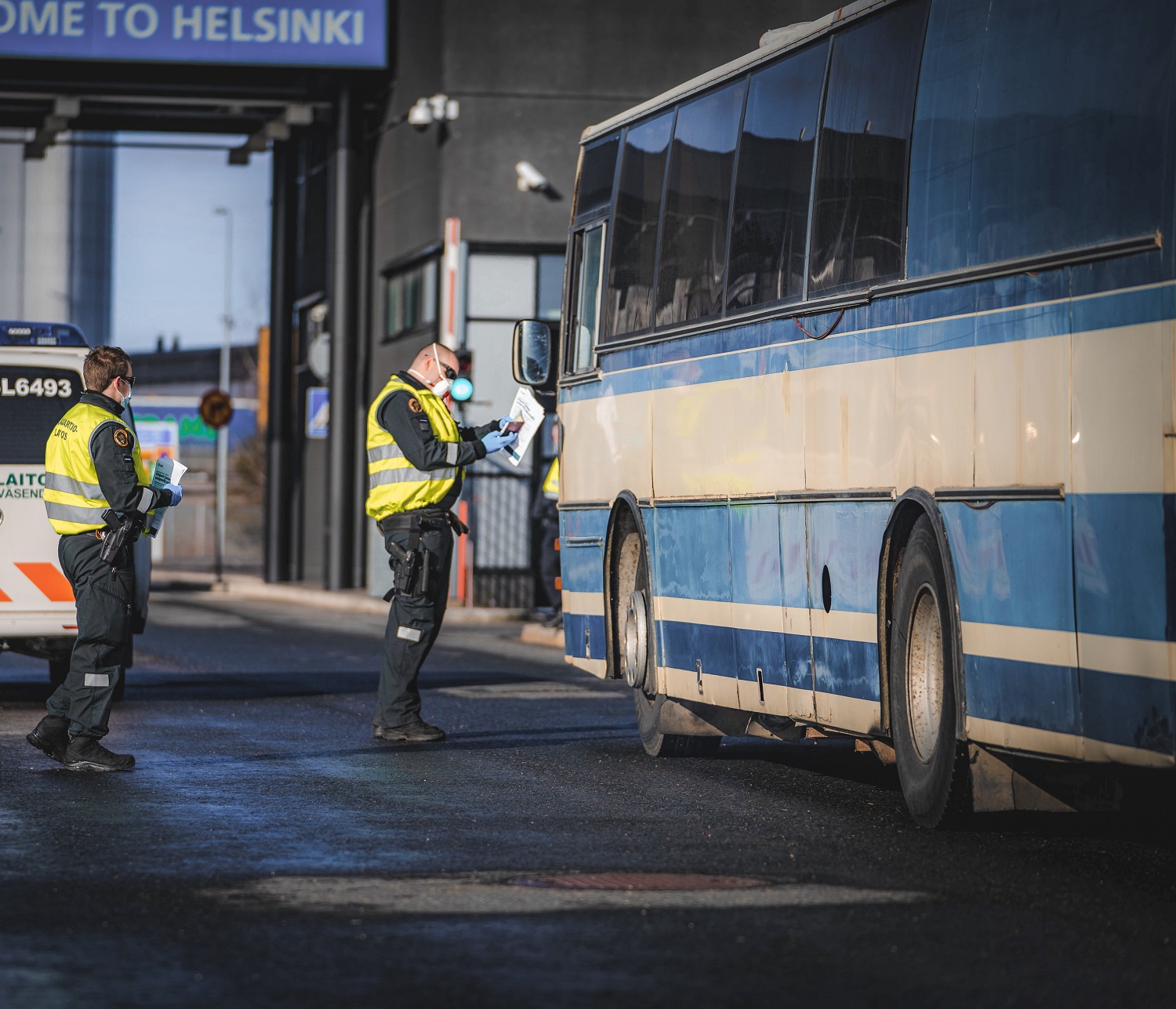 The entry of Russian citizens will be restricted. Read more about the restrictions.

Notifications shall be submitted to the Border Guard by e-mail (rajavartiolaitos(a)raja.fi) or mail (Border Guard Headquarters, PO Box 3, FI-00131 Helsinki). The notification shall include at least the following information:

According to Section 173 of the Aliens Act (301/2004), a carrier must ensure that any alien whom it brings into Finland and who is not an EU citizen or comparable must hold the travel document required for entry into the country, as well as any required visa or residence permit. Section 174 of the Aliens Act states that the driver of a vehicle, the master of a vessel or aircraft, or the representative of the carrier on board another vehicle is obliged to ensure that no-one who is not entitled to enter Finland enters the country without the permission of the border control authorities. The master of a vessel must give the border control authorities advance notification of any stowaway detected on board.

Sections 24 - 26 of the Act on the Processing of Personal Data by the Border Guard (639/2019) define the disclosure obligation that applies to vehicle drivers and carriers. The master of a vessel must provide the border control authorities at either the entry or exit point with information about the crew, passengers and other people aboard the vessel, either as a passenger and crew list or in another acceptable format. This information can be submitted with the aid of a technical interface. The passenger and crew list should show every person's forename, surname, date of birth, gender and nationality. It should also show the arrival and departure point of the vessel or craft, as well as its nationality and registration.

In addition to what is laid down in Section 24 of the Act on the Processing of Personal Data by the Border Guard, a natural person or body corporate engaging in professional passenger transport by air (the airline carrier) must, on request by the border control authorities, supply the information mentioned in Section 25 for any passenger that the airline carrier transports to an official border crossing through which the said person enters or leaves the Member States of the European Union (air passenger data).

A natural or legal person engaged in the professional transport of passengers or goods by water or rail must deliver the passenger and crew information to the border control authority before arriving at a border check.

In rail transport, the information must be delivered at the latest once the train has departed from the last station from which it took passengers on board. The provisions and regulations laid down in the Schengen Borders Code and elsewhere are applied to the advance delivery obligation of vessel traffic information.

Finland is governed by the Schengen Borders Code. In accordance with point 3.1.2 in Annex VI of this Code, a vessel's master, the ship’s agent or some other person duly authorised by the master or authenticated in a manner acceptable to the public authority concerned (in both cases ‘the master’), shall draw up a list of the crew and any passengers containing the information required in the forms 5 (crew list) and 6 (passenger list) of the Convention on Facilitation of International Maritime Traffic (FAL Convention) as well as, where applicable, the visa or residence permit numbers:

The master shall communicate the list(s) to the Border Guard.

The master shall notify the competent authority of the ship’s departure in due time and in accordance with the rules in force in the port concerned.

The FAL Convention forms 5 (crew list) and 6 (passenger list) must be saved in the PORTNET system in accordance with the Vessel Traffic Service Act (623/2005) and with the regulation issued by Finnish Customs on the notification procedure for vessels arriving at and departing from Finnish ports.

This regulation (updated annually) concerns arrival and departure notifications submitted for vessels arriving in or departing from a port in Finland, the content of these notifications and their entry into the electronic shipping data management system (Portnet) mentioned in section 20 a (225/2012) of the Vessel Traffic Service Act (623/2005), as well as the registration of vessels, their representatives and shipowners in the system.

If a foreign national is turned back or denied entry, Section 175 of the Aliens Act obliges the carrier that transported the alien to Finland to transport this person:

The former also applies to the carrier if a third country national travelling through Finland is denied entry to the country and, if:

If the border control authority has allowed the alien to enter the country, the carrier is not bound by the obligation in paragraph 1 unless the alien has sought asylum or a residence permit at the border, that is, either secondary, humanitarian, or temporary asylum.

Violation of the Aliens Act